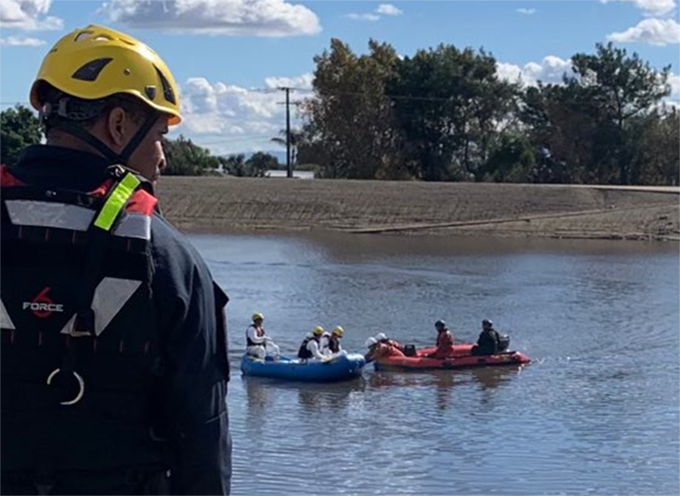 One person is dead and four are missing after fast-moving waters from heavy rain hit a homeless encampment in Southern California on Tuesday, officials said.

Officials rescued another four people who had been swept away in Ontario and another person managed to pull themselves out of the water, Dan Bell, director of communications for the city, said. All of those people have been medically cleared, Bell added.

Officials believe all of the individuals were living in a homeless encampment near an area that feeds into a basin, Bell said.

Homeless outreach officials from the San Bernadino County Sheriff’s Department reported Tuesday morning that there were six people who needed to be rescued from a riverbed on the 1200 block of East Fourth Street, according to information released by the city.

“They were doing their normal outreach ahead of a storm, from what I gathered,” Bell said of those officials.

The fire department said Wednesday in a tweet that “there has been an increase to the number of possible victims since yesterday as more info becomes available.”

Bell said officials pieced together the higher number of overall victims based on information provided by witnesses.

The five rescues were conducted on Tuesday, according to the fire department. Two of those people went to local hospitals before being cleared and one refused medical treatment.

Officials have not released the identities of the missing victims and deceased person, Bell said.

The fast-moving waters, shown in a tweet posted by the fire department, followed heavy rains in the region overnight Monday and into Tuesday morning, NBC Los Angeles reported.

“Here’s a quick video of how fast the current is moving,” said the tweet, posted Tuesday. “Please stay clear of any riverbed or flood channels.”

“Remember, just 6 inches of water can sweep you away,” the department added in a subsequent tweet. “Stay clear of all moving water!”

“We’re not presuming they’re dead, we’re trying to find them, but … we’re calling it recovery because we don’t know where they are,” he said.