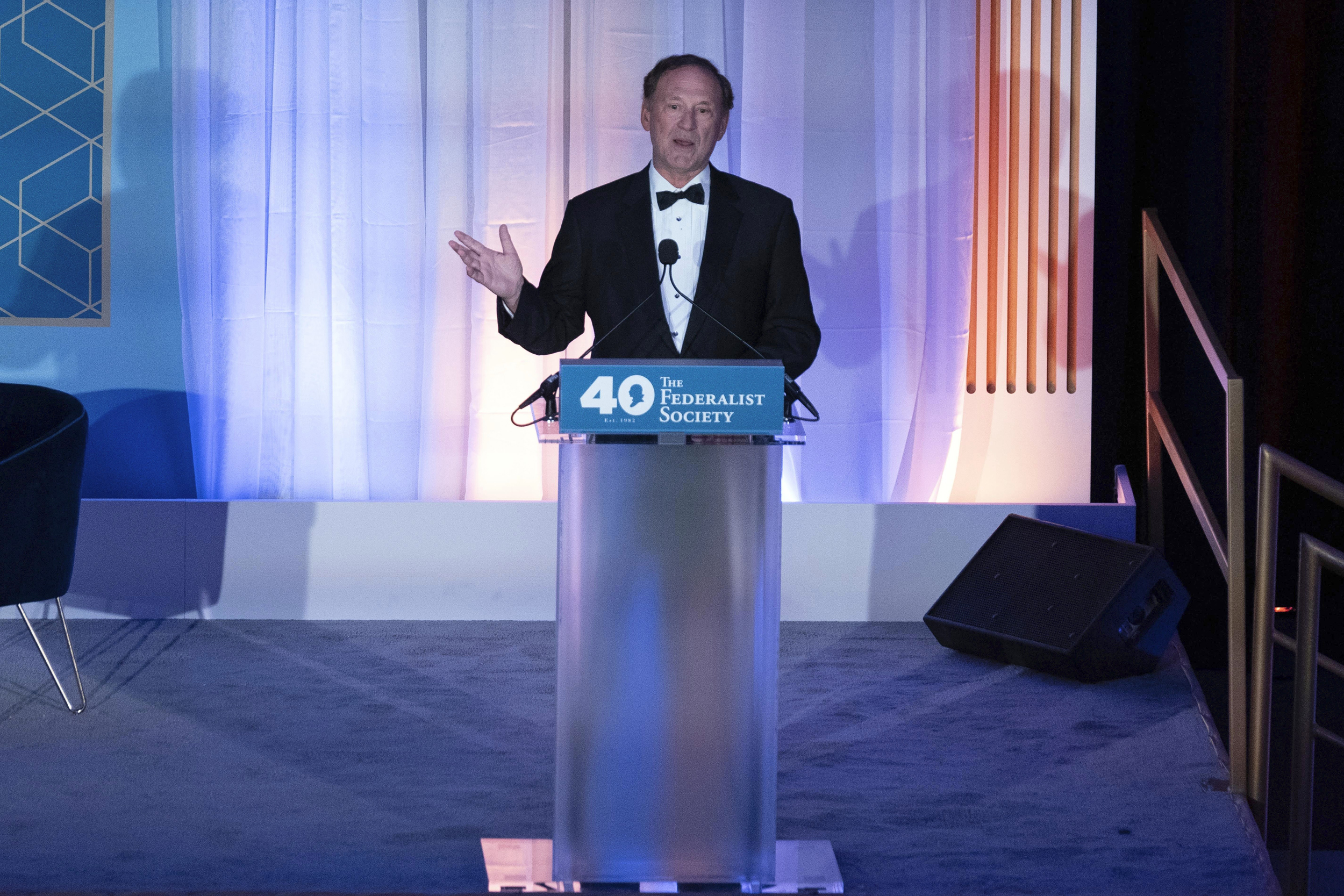 WASHINGTON — Justice Samuel Alito, who authored the Supreme Court ruling that upended abortion rights, was given a boisterous standing ovation Thursday at an event hosted by the Federalist Society, an influential conservative legal group.

Alito, in brief remarks at the organization’s 40th-anniversary gala near the Supreme Court, praised the influence the society has had on the legal landscape, with its members now spread throughout the federal judiciary.

“And boy, is your work needed today,” he said.

The hundreds of lawyers and law students in attendance gave Alito another standing ovation when a speaker onstage, Stephen Markman, a former Michigan Supreme Court justice, praised his opinion in the June ruling that overturned Roe v. Wade, the landmark 1973 decision that had protected abortion rights.

Three other conservative justices — Neil Gorsuch, Brett Kavanaugh and Amy Coney Barrett — also attended. Barrett made brief remarks praising the society, saying she had “benefited immensely” from her association with it, and she got her own standing ovation when she took the stage.

She said it was nice to hear “noise not made by protesters outside my house,” presumably a reference to protests before and after the abortion ruling, a draft of which was leaked in May. She was part of the conservative majority that overturned Roe.

The Federalist Society, which has always billed itself as a nonpartisan group where like-minded conservative lawyers meet to discuss the law, has over the years become akin to a farm team for federal judges. During the Trump administration, in particular, membership in the society was an almost uniform feature on a nominee’s résumé, acting as something of a stamp of approval.

Further cementing the group’s connection with the judiciary has been the role of Leonard Leo, who, aside from playing a key role within the group, has at times served as an adviser to presidents, including Donald Trump, on which nominees to pick. He played a role in providing Trump with a list of potential Supreme Court nominees that helped secure the support of skeptical conservatives during the 2016 election.

Leo got yet another standing ovation Thursday.

“Our movement has grown by leaps and bounds, and so has our impact,” he said.

Conservative legal activists in the past had been stung when Republican presidents picked Supreme Court nominees, such as former Justices David Souter and Anthony Kennedy, who ended up being either less conservative than expected or, in the case of Chief Justice John Roberts, less willing to rock the boat than expected by being more cautious and incremental in moving the law.

From a conservative perspective, the Trump administration’s judicial selection process was a well-oiled machine by comparison, as exemplified by the former president’s three Supreme Court picks, — Gorsuch, Kavanaugh and Barrett — all of whom had ties with the Federalist Society. Conservatives were delighted when the appointees, now part of a 6-3 conservative majority, all voted in June to overturn Roe v. Wade, a ruling that had helped galvanize the conservative legal movement in the first place.

The society was founded in 1982 by students at Yale Law School who felt conservatives lacked a voice on a liberal-dominated campus. Over the years, chapters were formed at law schools across the country, where students and conservatives would debate the law, thereby helping to connect people and expose them to conservative legal theories.