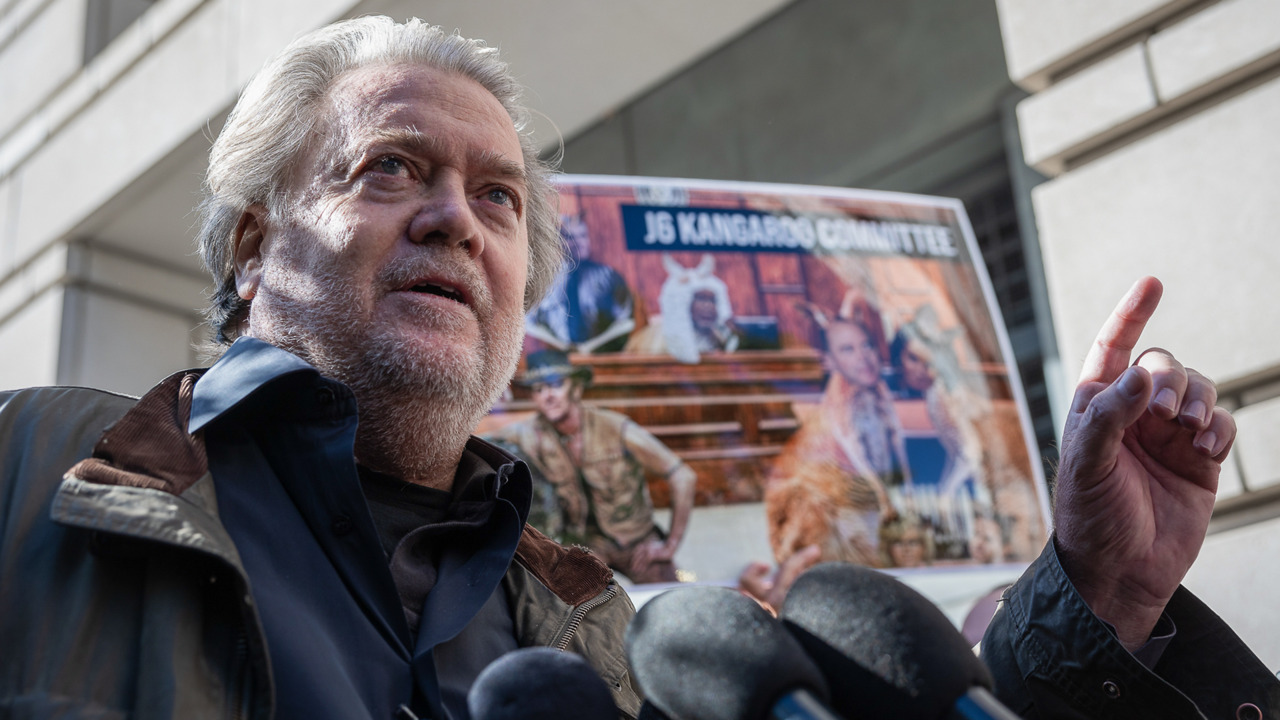 Nichols cushioned the blow of the four-month jail term by opting to allow Bannon, 68, to remain free pending appeal, which is likely to push the issue well into next year and perhaps longer.

A jury convicted Bannon in July on two charges of contempt of Congress — one for refusing to testify to the Jan. 6 select committee, another for refusing to provide relevant documents to the panel.

The select committee subpoenaed Bannon in September 2021 as it sought testimony from close Trump aides involved in efforts to help him subvert the 2020 election. Prosecutors charged him in November 2021, three weeks after the House voted to hold him in contempt.

Bannon entered the courtroom Friday wearing a drab green barn jacket and carrying a copy of the Financial Times. He wore no tie and, as is his custom, had three pens tucked into the outside of the outermost of his three visible shirts. The former White House official spoke only briefly, saying he was satisfied with his attorneys and had adequate time to review the probation office’s report on his conduct and background.

Bannon, who sat impassively through the hearing, opted against addressing Nichols when given the chance all defendants have to explain their actions. “My lawyers have spoken for me,” he said.

An attorney for Bannon, David Schoen, said his client shouldn’t be expected to show remorse because he did nothing wrong and deserved no punishment.

Cooney painted a picture of Bannon as stubbornly defiant to Congress’ demands.

“The defendant did not lift a finger,” the prosecutor said. “We might be in a different circumstance had the defendant fulfilled his minimal obligation and that is to show up. He failed to do even that….I can think of no more egregious contempt than what he has engaged in.”

Nichols explicitly disagreed with the government on that point, noting that Bannon had engaged legal counsel and had a dialogue with the committee. His lawyers also stressed that he said he was willing to testify if the privilege issue was resolved through negotiation or by a court.

Schoen used the sentencing hearing to attack the government’s tactics in the case, complaining that prosecutors sought email and phone logs for Bannon lawyer Robert Costello and wound up retrieving some records that actually belonged to a different man by the same name.

Prosecutors have acknowledged mistakes in their handling of those demands, but Schoen blasted the government for its conduct.

“That’s a lie to a federal judge,” he declared. “That demeans the integrity of this process.”

Under federal law, the two misdemeanor counts Bannon was found guilty of each carried a minimum term of one month’s incarceration and a maximum of a year in prison. The Justice Department had asked Nichols to sentence Bannon to a six-month prison term. Prosecutors contended that the minimum sentence is mandatory, but Bannon’s lawyers argued that he could be sentenced to probation or to home confinement, rather than prison.

Nichols said several favors weighed in favor of a “substantial” sentence for Bannon — from the seriousness and significance of the Jan. 6 select committee probe to Bannon’s continued defiance of the select committee even after Trump purported in July to “waive” any assertion of executive privilege over his cooperation.

While many legal commentators have insisted that Bannon could not have had privileged conversations with Trump after Bannon left the White House staff in 2017, Nichols pointedly said Friday that such discussions might be covered by executive privilege.

However, the judge also seemed troubled that Bannon never produced any documents to the committee, even those that seemed certain not to be covered by any privilege Trump was asserting.

Nichols did acknowledge that Bannon appeared to rely on his lawyer’s advice, and he noted that the Jan. 6 select committee opted against a civil lawsuit to enforce its subpoena.

Bannon was the first of four witnesses held in contempt by the select committee for refusing to comply with a subpoena. One other, former Trump adviser Peter Navarro, was also charged and is scheduled to stand trial next month before U.S. District Court Judge Amit Mehta. The Justice Department, however, declined to bring charges against two other top Trump aides, Mark Meadows and Dan Scavino, who were similarly held in contempt by the panel.

Bannon, who used his “War Room” podcast to promote false claims that the election was stolen by Joe Biden, was among those helping Trump strategize to prevent Biden from taking office, in part by orchestrating challenges by congressional Republicans. Bannon was part of a team of close Trump advisers who helped monitor the strategy in real-time from a command center at the Willard Hotel on Jan. 5 and 6, 2021. He also helped convince Trump to focus his energy on the Jan. 6 election certification session of Congress as a last resort to remain in power.

Bannon also appeared to express knowledge, in late October 2020, of Trump’s plan to declare victory on election night even before the results of the presidential contest were conclusive.

DOJ attorneys argued that the move was primarily intended to disrupt the trial. Bannon has yet to provide any documents or testimony to the select committee despite Trump’s purported decision to bless his cooperation.

Bannon has primarily argued that the case against him is based on an unfair interpretation of complicated legal principles regarding executive privilege, the powers of the former president and whether he was entitled to rely on his lawyer’s advice when he initially opted against appearing for testimony of providing any documents to lawmakers.

In the run-up to the weeklong trial, Nichols agreed with prosecutors that longstanding court precedents prevented Bannon from arguing that he was merely following his lawyer’s counsel. And Nichols agreed that the same precedent barred Bannon from claiming he believed he was immune from testifying because of Trump’s executive privilege, a decision that stripped Bannon of his strongest defense. Bannon intends to make those rulings a centerpiece of his appeal.

Despite his near silence Friday in front of the judge, after the hearing, Bannon eagerly appeared before cameras camped out outside the court. The former White House aide proclaimed his respect for the court and the “legal process,” then launched into a political broadside declaring that the midterm elections next month would spell doom for the Biden administration.

“The Biden administration ends….on the eighth of November,” Bannon vowed. “Merrick Garland will be the first attorney general brought up on charges of impeachment and removed from office.”

Bannon’s provocative comments echoed his bombastic remarks at the outset of the criminal case last year, when said it would prove to “be the misdemeanor from hell for Merrick Garland, Nancy Pelosi and Joe Biden.”

When Bannon was asked Friday why he’d chosen not to testify at his trial or address the court at sentencing, Schoen cut in and said: “That was at my direction.”

Schoen told reporters that Nichols’ decision to allow Bannon to delay reporting to jail signaled the seriousness of the legal issues to be raised in his appeal.

“It’s an extraordinary move to permit a stay pending appeal. That was the appropriate move,” the defense attorney said. “I believe the appeal in this case is bulletproof.”