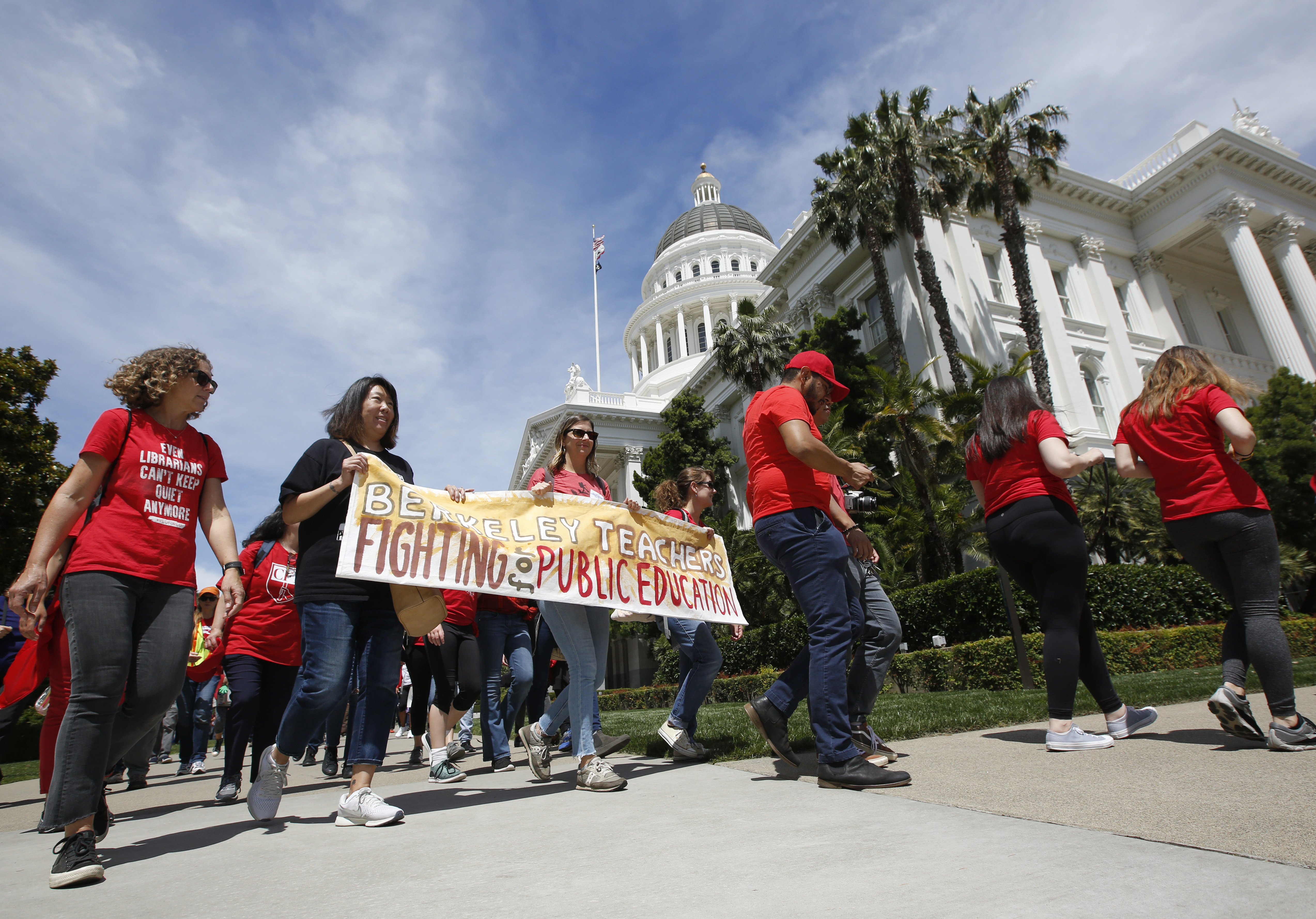 “Privatizers and politicians with extreme agendas have been attempting to divide our communities, instill fear and bring political culture wars into schools,” CTA spokesperson Claudia Briggs said in a statement Friday in response to questions about its political spending. “Together with parents, we will continue to fight for our democracy and against flawed initiatives and politicians who put their agenda ahead of what is best for students and our communities.”

That expanded focus — influenced in part by the left-leaning politics of local union leaders — has proven valuable in tough policy fights, bolstering campaigns with a trusted profession’s stamp of approval. It also serves to strengthen the union’s relationships with like-minded groups closely linked to the Democratic Party.

Not surprisingly, CTA’s influence and party ties are a source of deep resentment for many conservatives in California politics. Lance Christensen, a GOP state superintendent candidate and longtime budget analyst, calls the union a “bully” that he “abhors.”

The Democratic Party and the union, he said in an interview, are “one and the same.”

The union has cash to burn this year. An arts and music education measure is cruising toward passage with no organized opposition. The association’s pick for state superintendent, Democratic incumbent Tony Thurmond, is a heavy favorite in a state that has shut the GOP out of statewide elected offices for more than a decade.

CTA has contributed $250,000 to Prop 1, a ballot initiative that would enshrine the rights to abortions and contraceptives in the state’s constitution. It chipped in another quarter of a million toward Prop 31, which would allow a state ban on flavored tobacco sales — put on hold by a challenge from tobacco companies — to take effect.

The union put another $5 million toward its opposition to Prop 30, a measure that would tax the ultra-wealthy to raise money for electric vehicle incentives and wildfire prevention — but not for education. CTA has a long history of fighting policies that could sidestep California’s minimum funding guarantee for schools.

CTA’s policies are set by its 700-plus member State Council of Education, Briggs said.


The state’s next-largest union of school employees, the CFT, also gave a quarter of a million dollars to support the abortion rights measure, the same amount to fight Prop 30, and $10,000 to end flavored tobacco sales. That union’s president, Jeffery Freitas, said such contributions are steered by its elected representatives, who have long voted to back public positions on immigration reform and racial and social justice.

Freitas also stressed the connection between schools and issues like Props 1 and 31. School employees and students alike seek out abortions, and flavored tobacco has been a scourge for student’s health, he said.

CTA’s spending follows an ideological shift within education labor that organizers say began shortly after the mortgage crisis and Great Recession, in which millions of families lost their homes and schools suffered deep budget cuts. Over that span, a more “progressively-minded” CTA has emerged, said Jane McAlevey, an organizer and negotiator who has worked for local teachers unions over the last dozen years.

Teachers unions in California are now “more open to looking at the intersection of crises, a turn away from a more narrow, traditional look at just wages and benefits,” she said.

Take the 35,000-member United Teachers Los Angeles, a union rivaled in prominence by only the Chicago Teachers Union and the United Federation of Teachers in New York City. Nearly a decade ago, progressive candidates swept its internal election, and UTLA has since expanded the scope of contract negotiations to demand such policies as district support for undocumented students.

Unions from Oakland to Sacramento followed suit, as has CTA, their statewide umbrella organization, under pressure from rank-and-file members, said Bradley Marianno, an education policy professor at the University of Nevada, Las Vegas who studies teachers union influence in California.

“We’ve seen a growing progressive caucus in both local and state level unions that are starting to tackle more social justice-focused issues that are associated with education, but not central to the delivery of education,” Marianno said in an interview.

Teachers’ union endorsements are valuable because “most voters do not see a distinction between the organization of the teachers union and their local classroom teacher,” said Marianno. So, voters may see the backing of a teachers union as a signal of support from teachers in their own communities.

CTA and CFT have branched out before. In 2008, they fought the Prop 8 same-sex marriage ban, which passed only to be struck down by the U.S. Supreme Court as unconstitutional. But that was “more exception than rule,” said McAlevey, a senior fellow at the University of California Berkeley Labor Center.

The potential payoffs of supporting broader Democratic Party priorities are obvious. Democrats hold a supermajority in the state Legislature, which — along with the governor — sets the education budgets. And the state party has supported CTA-backed campaigns, like when then-Gov. Jerry Brown and other prominent Democrats stumped for a successful millionaire’s tax that sent millions to public schools and universities after the Great Recession.

And “if you’re trying to play in power politics,” McAlevey said, “you’re going to wind up playing more with the party in power.”