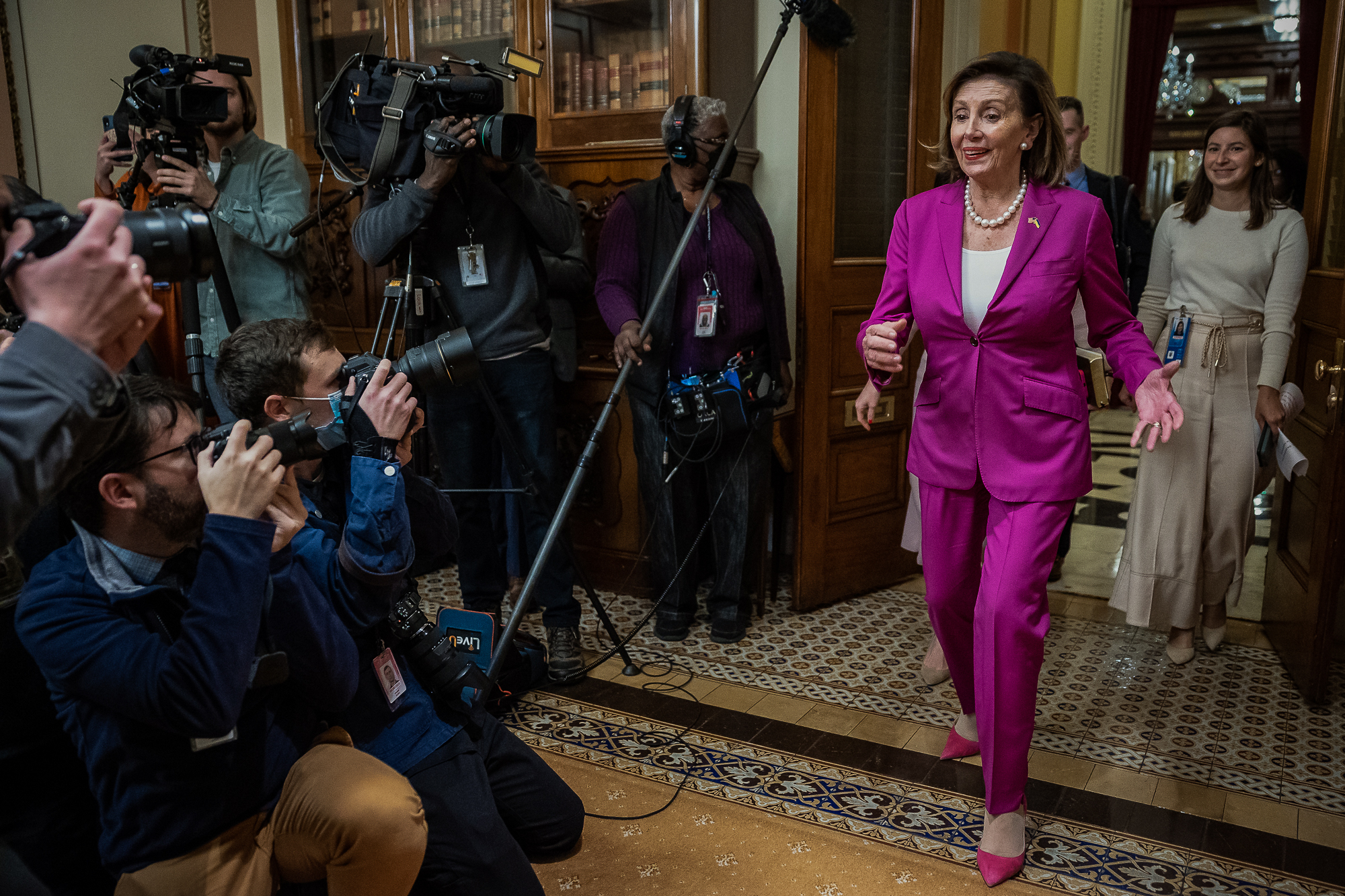 Underscoring the unprecedented scenario Democrats now find themselves in, lawmakers chuckled in a closed-door meeting Tuesday as House Majority Leader Steny Hoyer (D-Md.) spoke up to agree with something Pelosi said with a quip about her current role.

“I associate myself with the previous speaker. The current Speaker. The — well, who knows,” Hoyer said in the caucus meeting, according to people in the room. He and House Majority Whip Jim Clyburn (D-S.C.), Pelosi’s other long-serving deputy, are also the subject of intense speculation as to their own futures in leadership.

When asked later about his plans for leadership, Hoyer said only that “I’m waiting on the results.”

Beyond the white smoke that’s yet to materialize signaling a shakeup atop the caucus, Democrats were euphoric as they huddled in the Capitol this week. They delivered thunderous standing ovations to battle-tested incumbents who prevailed over pro-Trump candidates, like Rep. Marcy Kaptur (D-Ohio), while welcoming dozens of new faces.

Pelosi was particularly elated as she decried “D.C. bedwetters” — including some in her own party — who predicted Democrats would lose big but “know nothing about our districts,” as she put it to members in a closed-door meeting Monday night.

House Republicans have begun holding their own leadership elections, even as they are one seat shy of the 218 needed to officially lock down the majority. Despite seven uncalled competitive races in California and Colorado, a formal House call could come as soon as Tuesday.

Pelosi’s looming decision was, naturally, the subject of much private chatter as her caucus huddled for its first big in-person meeting on Tuesday. (One person present said it was perhaps the biggest topic of discussion on the sidelines of the meeting, other than lawmakers finding out whether they were wait-listed for Taylor Swift tickets.)

Even some of Pelosi’s close colleagues are coy about whether they’ve been personally asking her to stay, as the speaker hinted on CNN on Sunday.

“What do you think?” Rep. Barbara Lee (D-Calif.) said with a smirk, when asked if she’s been encouraging Pelosi to stay on. “You’ll have to figure it out yourself.”

Other allies, though, are more direct even as they also say they have no clue what she’ll choose.

“I think this is a moment where it would be a good idea to stay in this position,” said another longtime Pelosi friend, Rep. Jan Schakowsky (D-Ill.). “Personally, I see her embracing that possibility. But, I don’t know.”

And House Rules Chair Jim McGovern (D-Mass.) added: “She has my support for whatever she wants. I don’t know what she wants to do. She hasn’t told me.”

One of those exceptions is Rep. Jamaal Bowman (D-N.Y.), a member of the progressive Squad who praised Pelosi’s “outstanding career” and said in a brief interview that he loved her before adding: “I think it’s time for a new speaker.”

Clyburn allies say they believe he plans to stay in leadership if Pelosi steps down — a possibility that Clyburn himself has repeatedly raised, including in a CNN interview earlier Tuesday, where he said: “I plan to stay in leadership,” though he didn’t know exactly in what capacity.

“I’m excited about all of the people who are running for leadership, including Mr. Clyburn. I think what we’re trying to figure out is what people are running for exactly … you’re going to have continuity of people running, and certainly Mr. Clyburn brings continuity in leadership,” said Rep. Joyce Beatty (D-Ohio), the outgoing Congressional Black Caucus chair who’s running for a lower-ranking leadership position.

Meeks, another Black Caucus member, added: “Clyburn clearly has made a great contribution, and has a lot more to give. He wants to make sure that he has that ability.”

With the Democrats’ so-called top three mostly staying mum, the crop of members looking to replace them are also quiet.

One of them is Democratic Caucus Chair Rep. Hakeem Jeffries (D-N.Y.), who’s expected to run for the top spot in leadership if Pelosi leaves. Jeffries held his own press conference shortly after the full caucus gathering, where he skewered the GOP and swatted aside questions about the future.

“House Democrats have vastly over-performed expectations, and we will have momentum going into the 118th Congress,” he said. “We are at a point in time where the focus should continue to be on making sure that every single vote is counted.”

Then he insisted the caucus would press forward with leadership elections scheduled to start on Nov. 30.

Ally Mutnick and Nancy Vu contributed to this report.