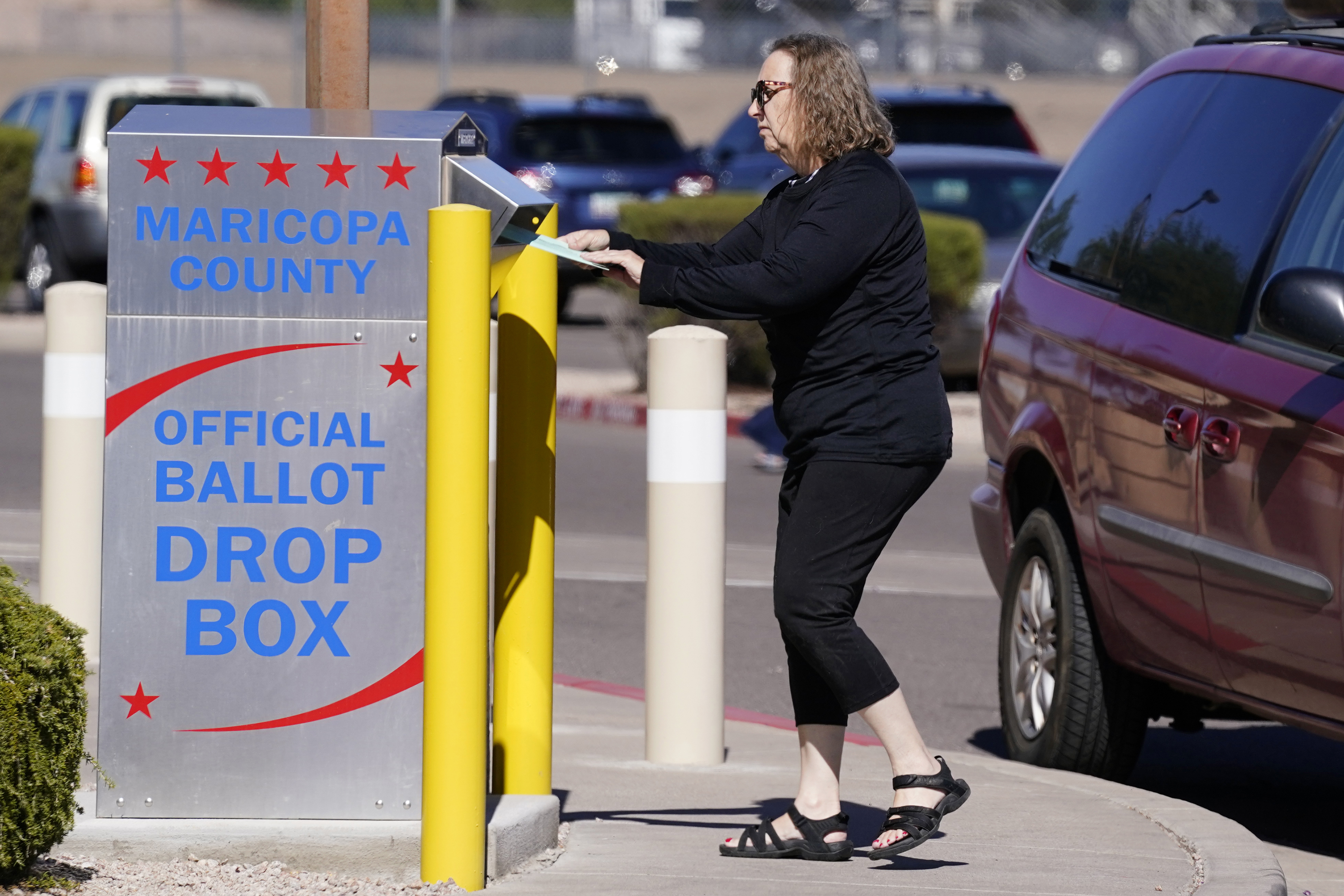 Local and federal law enforcement have been alarmed by reports of people, including some who were masked and armed, watching 24-hour ballot boxes in Maricopa County — Arizona’s most populous county — and rural Yavapai County as midterm elections near. Some voters have complained alleging voter intimidation after people watching the boxes took photos and videos, and followed voters.

Arizona law states electioneers and monitors must remain 75 feet from a voting location.

“Plaintiffs have not provided the Court with any evidence that Defendants’ conduct constitutes a true threat,” the judge wrote. “On this record, Defendants have not made any statements threatening to commit acts of unlawful violence to a particular individual or group of individuals.”

The Arizona Alliance for Retired Americans said it was disappointed.

“We continue to believe that Clean Elections USA’s intimidation and harassment is unlawful,” it said, adding it would “seek immediate appellate review and emergency relief.”

Liburdi issued his ruling two days after a hearing on the first of two similar cases. The attorney for Clean Elections USA had argued that such a broad restraining order would be unconstitutional.

A second lawsuit involving charges of voter intimidation at drop boxes in Arizona’s Yavapai County has since been merged with the first one.

Sheriff’s deputies are providing security around the two outdoor drop boxes in Maricopa County after a pair of people carrying guns and wearing bulletproof vests showed up at a box in the Phoenix suburb of Mesa. The county’s other 24-hour outdoor drop box is at the Maricopa County Tabulation and Election Center in downtown Phoenix, which is now surrounded by a chain link fence.

Arizona Attorney General Mark Brnovich, a Republican, has called on voters to immediately report any intimidation to police and file a complaint with his office. Arizona’s secretary of state this week said her office has received six cases of potential voter intimidation to the state attorney general and the U.S. Department of Justice, as well as a threatening email sent to the state elections director.

The U.S. attorney’s office in Arizona has vowed to prosecute any violations of federal law but said local police were at the “front line in efforts to ensure that all qualified voters are able to exercise their right to vote free of intimidation or other election abuses.”

“We will vigorously safeguard all Arizonans’ rights to freely and lawfully cast their ballot during the election,” the office said Wednesday. “As the several election threat-related cases pending federal felony charges from alleged criminal activity arising out of our State show, acts which cross the line will not go unaddressed.”

Meanwhile, the Citizens Clean Elections Commission, an Arizona state agency, voted unanimously Thursday to have its legal counsel seek a court order if necessary to stop the monitoring group from using the “Clean Elections” name. The commission created in 1998 to provide voters with nonpartisan elections information said it has been barraged with angry calls from people confusing it with the monitoring group.

The second lawsuit that was folded into the first case involves ballot boxes in Arizona’s Yavapai County, where the League of Women Voters alleges voters have been intimidated by Clean Elections USA, along with The Lions of Liberty and the Yavapai County Preparedness team, which are associated with the far-right anti-government group Oath Keepers.

Luke Cilano, a Lions of Liberty board member, said the organization had dropped its “Operation Drop Box” initiative on Wednesday “due to being lumped in with people who don’t adhere to the law and our rules of engagement.”

Cilano said the “official stand down order” to all members was in response to the pending litigation.

“Our goal is not to scare people and keep them from voting,” he said. “We love our country very much.”

Cilano said The Lions of Liberty is in no way associated with Clean Elections USA. He said his group is connected to the Yavapai County Preparedness Team, but the team was not involved in ballot box monitoring.

Similar groups around the United States have embraced a film that has been discredited called “2000 Mules” that claims people were paid to travel among drop boxes and stuff them with fraudulent ballots during the 2020 presidential vote.

There’s no evidence for the notion that a network of Democrat-associated ballot “mules” has conspired to collect and deliver ballots to drop boxes, either in the 2020 presidential vote or in the upcoming midterm elections.