L.A. sheriff’s deputy charged in 2021 fatal shooting of man who was already on the ground > Dogecointool Skip to content 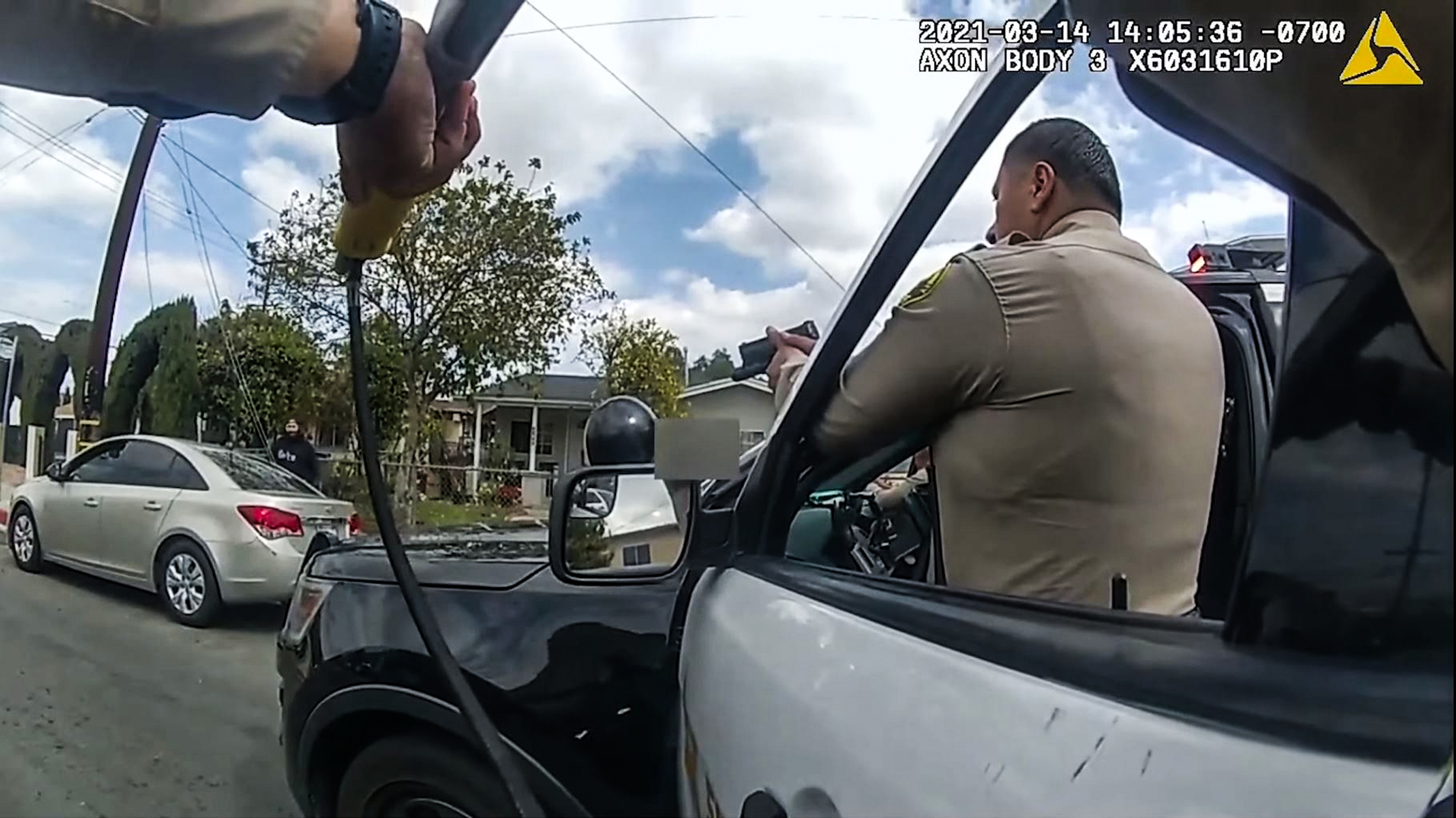 A Los Angeles sheriff’s deputy was charged Wednesday for an on-duty, unlawful fatal shooting of a man who was holding a knife last year outside his family’s East L.A. home.

L.A. County Sheriff’s Deputy Remin Pineda, 38, was charged with one felony count each of assault with a semiautomatic firearm and assault under color of authority following the March 2021 fatal shooting of David Ordaz, Jr., L.A. County District Attorney George Gascón announced Thursday. An arraignment date has not been set.

Pineda is accused of continuing to shoot Ordaz even after he dropped his knife, fell to the ground and had his back to Pineda and other deputies, a news release from the DA’s office states.

Pineda fired at least 12 rounds at Ordaz in total, according to a county coroner’s report provided to NBC News last year by the family’s legal representative, the law firm of Alan A. Ahdoot.

The deputies arrived on the scene after Ordaz’s sister, Hilda Pedroza, called them and reported that her brother had a knife and was suicidal. His family witnessed the death, Gascón said.

“This tragic killing of Mr. Ordaz in the presence of his own family has caused tremendous harm that will reverberate for years to come,” Gascón said in a statement.

Ordaz was a father of three, according to NBC Los Angeles.

In July 2021, embattled L.A. Sheriff Alex Villaneuva said he had “grave concerns” over Ordaz’s death following the release of body camera footage showing the shooting and the filing of a lawsuit by Ordaz’s family against L.A. County and four deputies.

Villaneuva also said Ordaz was “under the influence of drugs and wanted to commit ‘suicide by cop.’”

The department said that Ordaz had been convicted of drug possession and DUI.

Villaneuva said last year the shooting was under internal investigation and that he’d share results of the inquiry with the FBI.

The DA’s office said that investigation is ongoing, but a representative for the sheriff’s department said in a statement that the department submitted the investigation to the DA’s Justice System Integrity Division for review.

Neither office immediately replied to a question about the apparent discrepancy.

Pineda was dismissed from his position as a result of the incident “and will continue to be relieved of his peace officer powers pending the outcome of the court proceedings,” according to information from the sheriff’s office.

The lawsuit filed by Ordaz’s family suit said he was “not in his right mind” when his sister called 911 to report he had “a regular kitchen knife” and was on methamphetamine and suicidal. The deputies “used unjustifiable force” to cause the 34-year-old’s death, the suit alleged, claiming wrongful death and violation of California civil rights, which protect people targeted for violence as a result of a “medical condition.”

The status of that lawsuit was not immediately clear.

The deputies’ union, Association for Los Angeles Deputy Sheriffs, did not immediately return a request for comment.

The charges against Pineda follow years of troubling allegations against the sheriff’s department and its deputies.

In August, another L.A. County sheriff’s deputy, Sean Essex, 51, was indicted on charges of sexually assaulting four girls in a case that prosecutors had declined to pursue a decade ago.

Last year, a state civil rights investigation was opened into the sheriff’s department over allegations of excessive force. A spokesperson for the state attorney general’s office told NBC News last month the investigation is ongoing and that officials could not comment further as a result.

The department has also been criticized for “deputy gangs,” which a 2021 report released by Loyola Law School numbered at 18.

Department officials shot and killed Andres Guardado, 18, in June 2020. An independent autopsy his family released in July said he was shot five times in the back. Sheriff’s detectives placed a security hold on the county coroner’s conclusions, a move Sheriff Alex Villanueva defended as necessary to preserve the investigation’s integrity. But the coroner’s office launched a rare inquest that found Guardado’s death was a homicide, and the deputy who shot him declined to testify.

A few months after Guardado’s killing, leaders of the U.S. House Oversight and Reform Committee demanded the Justice Department investigate the sheriff’s department, alleging the deputy cliques “adhere to white supremacist ideologies, belong to ‘criminal gangs,’ and engage in an ‘aggressive style of policing’ motivated by racism.”