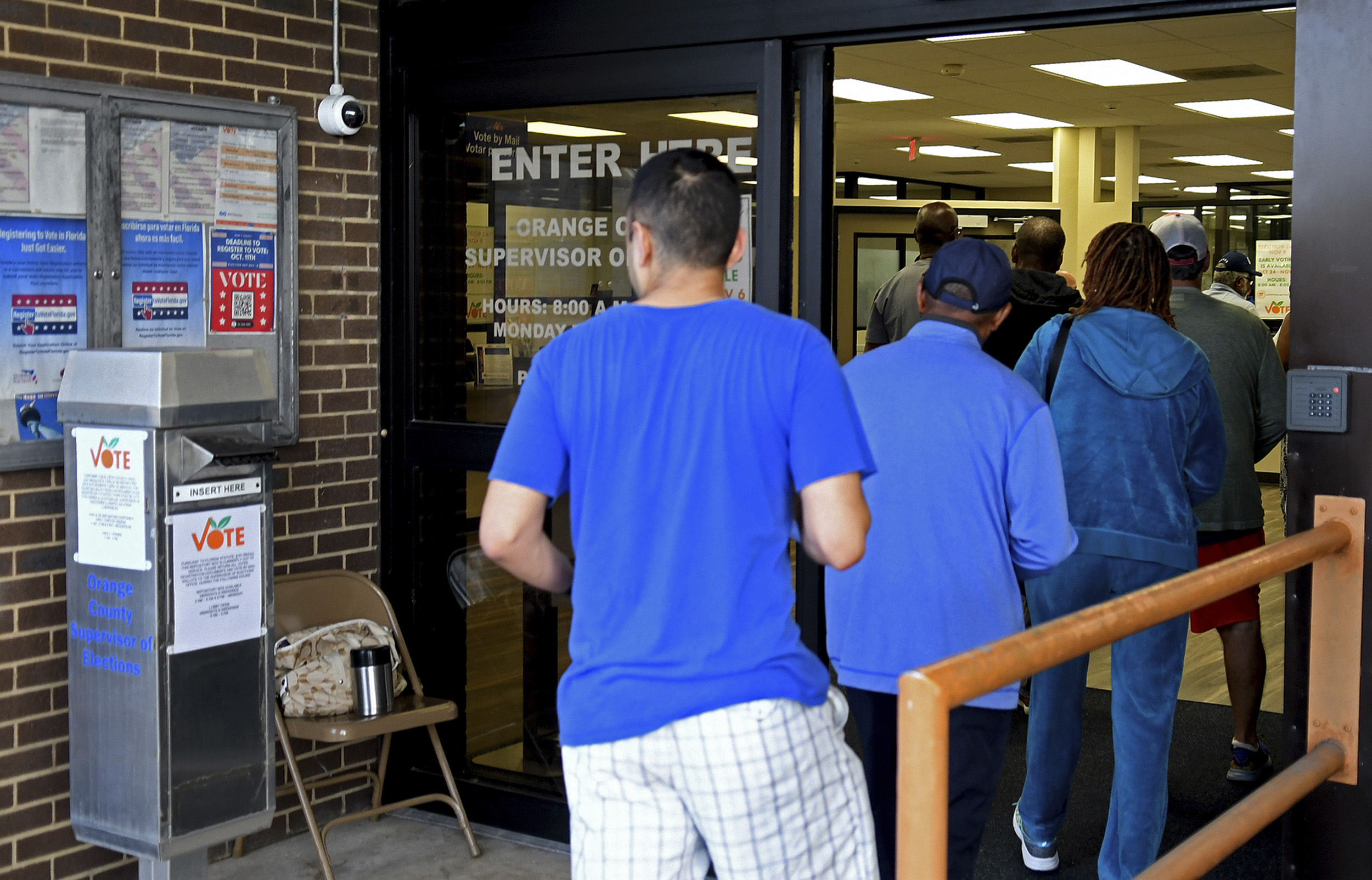 Sofia Macaya Hale, 49, a chiropractor therapist in Tampa, Florida, was unsure how she’d vote in the upcoming midterms. But she was sure her biggest concern is the high cost of living, especially rising prices for food and gas.

For Jackie Duque, 21, a college senior in Austin, Texas, abortion is the top priority. The overturning of Roe v. Wade “was like an attack on me,” she said, adding that she was diagnosed with an illness that could affect her ability to have children and is worried about laws that won’t allow her to undergo a necessary procedure, including an abortion to safeguard her health.

Latino voters in battleground states such as Florida, Texas and Arizona can move the needle in tight races that will determine what party controls Congress and top state offices.

Results of the eighth week of a Latino tracking poll commissioned by the National Association of Latino Elected and Appointed Officials (NALEO) has consistently shown that the economy ranks as the top concern of Latino voters — at 47% — and that abortion and reproductive rights, once hardly mentioned, vaulted to the No. 2 concern this midterm election season, at 30%.

This week, the final week of polling before the Nov. 8 election, shows Latinos backing Democratic candidates for Congress nationally.

Despite those poll results, Republican candidates in tight races may only need a small margin of Latino votes to win, as both parties make last-minute appeals to Hispanics amid early voting and ahead of Election Day on Tuesday. NALEO projects about 11.6 million Latinos will vote on Nov. 8 — about the same as in 2018.

“It’s clear that the cost of living and inflation is the most important issue for Latino voters — that has not changed at all” in the weeks of polling, said Arturo Vargas, NALEO’s executive director.

But he added that abortion and reproductive rights have consistently remained No. 2, particularly with Latinas, who are more likely than Latinos to say they are not doing better economically than two years ago.

“I don’t know if (concern about abortion) is going to be strong enough to overcome how important economic issues are to Latino voters,” Vargas said.

In Florida, César Grajales, public affairs director at the Libre Initiative, a conservative group, has been canvassing in Florida’s 27th Congressional District, which is majority Latino. In that race, the Republican incumbent, Maria Salazar, is in a contentious race with Democratic challenger and state Sen. Annette Taddeo.

“What we hear from people is that they’re worried about the economy,” Grajales said. “Inflation is really hurting everybody.”

This was echoed by Democrat Alex Berrios, co-founder of the voter registration group Mi Vecino, who said that in the five Florida counties they’re operating in, voters’ interests are predominantly on economic issues.

Republicans have hit hard on inflation and higher prices, while Democrats have countered with the Biden administration’s measures after the pandemic that have sharply reduced unemployment.

On abortion, Democratic candidates are hammering Republicans on the rise in bans and restrictions following the Supreme Court’s overturning of Roe v. Wade in June.

Fernand Amandi, president and CEO of the Democratic polling firm Bendixen & Amandi, based in Florida, said the abortion issue “is the ultimate wild card. Why? Because we never in our lifetimes have had the chance to vote on a constitutional right being taken away from Americans.”

Texas imposed a ban on abortion soon after Roe v. Wade was overturned.

Vargas said NALEO’s polling did show a larger share, 35%, of Latino voters in Texas considered abortion one of the most important issues compared to Latinos nationally, 29% who named it as one of their top concerns.

Cristina Tzintzún Ramirez, president and executive director of the progressive group NextGen America, said the group was seeing higher enthusiasm among young people about voting, particularly in registering voters on campuses in Texas and Arizona.

But Luke Macías, a conservative political consultant in San Antonio, said the issue has energized the Democratic base, “but I don’t see it moving swing voters. The influence on those votes is waning.”

In Oregon, state Rep. Andrea Salinas, a Democrat, hopes to become the first Latina elected to Congress from the state. She faces Republican Mike Erickson in a race that Cook Political Report rates a “toss-up,” even though the district leans Democratic.

Salinas said that she helped pass Oregon’s Reproductive Health Equity Act in 2017, which helped residents, even those without access to health care under Medicaid, get health services and also codified the right to abortion in state law.

In the battleground state of Arizona, Latinos backed Democratic candidates 58% to 27%.

NALEO did not poll in Nevada, but a recent Univision poll found Latinos favored Democratic congressional candidates 60% to 27% and broke similarly in the Nevada Senate race between the Democratic incumbent, Catherine Cortez Masto, and her Republican challenger, Adam Laxalt.

The race there is between the Republican incumbent, David Valadao, and Democratic state Assemblymember Rudy Salas, who could become the first Latino member of Congress elected from the predominantly agricultural region. It’s a Latino-majority district and a race the nonpartisan Cook Political Report classifies a “Republican toss-up.”

Rodríguez said that depending on age, the most pressing issues for Latinos in the district were jobs and solutions to lack of housing. The region has traditionally been characterized as a conservative stronghold, but Rodriguez said that the real insight is to try to understand the complex needs of Latinas in the district “who are the driving force behind the Latino vote — and that’s the bottom line.”