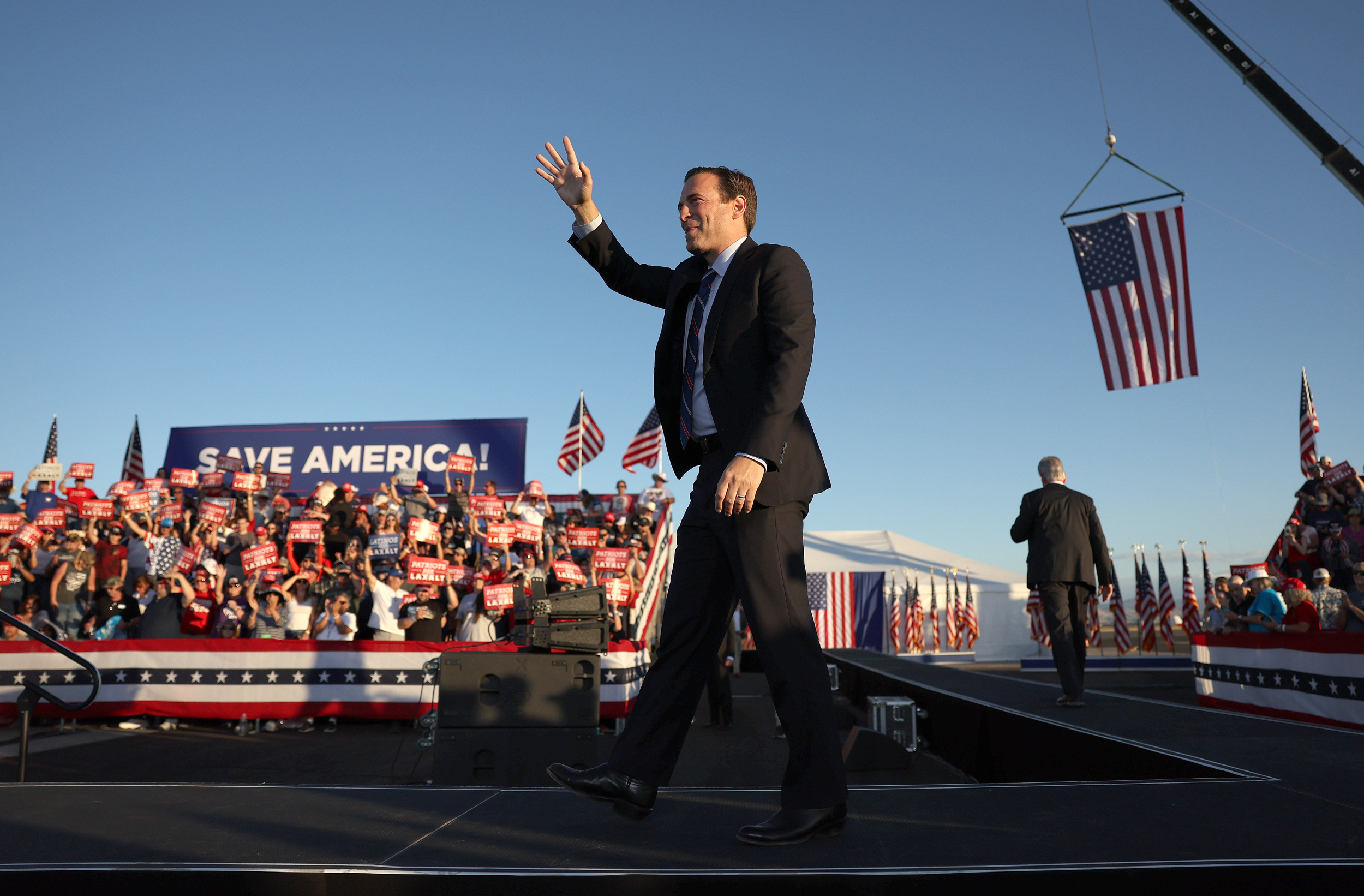 SPARKS, Nev. — For more than a year, Republican Senate candidate Adam Laxalt has pitched Nevada voters on sending him to Washington with a simple message: He has little interest in working with Democrats when he gets there.

The left should be put “in the ash bin of history,” and Republicans “can’t negotiate with” Democrats, he said in separate June media appearances. In March he declared, “The left must be defeated. We must destroy their radical ideology.”

And in the closing weeks of one of the tightest swing-state races in the country, Laxalt at a Reno event in October showed no interest in working with “the radical, leftist Democrat Party.”

His pitch defies conventional wisdom, which traditionally sees candidates trying to broaden their appeal in the twilight of a general campaign that could hinge on swing voters. Since last year, Laxalt has made comments in media appearances, speeches and audio obtained by NBC News that show a Senate candidate who is preparing to back all manner of investigations into Democrats if he takes office, and who’s grown impatient with Republicans who moderate. By contrast, Sen. Catherine Cortez Masto, the Democratic incumbent, on the trail has boasted of Republican endorsements and highlighted her work with Republicans like Iowa Sen. Chuck Grassley.

Asked whether he would take steps toward bipartisanship once he takes office, Laxalt campaign spokesman Brian Freimuth said, “Adam will work with anybody to get the country back on track and undo the damage President Biden and Senator Cortez Masto have done to our economy.”

That Laxalt has suggested the opposite on the trail is a window into a new era of politics this election season, where, in hopes of turning out the base in droves, he has taken on more of a primary campaign posture. It also underscores the Nevada GOP’s transformation, one that’s marked by loyalty to former President Donald Trump and that has grown intolerant of any Republicans perceived to be bending to Democrats, even expelling members from the party structure who’ve stepped out of line.

“It’s no small deal for us to have the gavels. How many of you want to see Dr. Fauci in front of a Senate hearing?” Laxalt said at that stop, where he also praised Florida Gov. Ron DeSantis for going to war with Disney, according to audio obtained by NBC News. “We need legitimate oversight because people feel like, ‘What in the world is going on with the Hunter Biden investigation?’ Can you imagine if that was a Trump kid that had the laptop from hell?”

In Nevada, there’s a palpable sentiment among Republicans that they have to forcefully combat traitors within their own party at the same time they’re attempting to block Democrats from maintaining their hold on key offices, including the governorship and the U.S. Senate seat.

“I have more steak knives in my back from Republicans that have turned on us and stepped on us for their own benefit,” Nevada GOP Party Chair Michael McDonald said at a recent event in Reno. “Well, you know what? They’ll answer for that now. They’re answering for it now because we have great people running for this office that will turn this around.”

McDonald’s fiery sentiment is one that’s permeated the GOP here over time, as Trump’s popularity exploded in the 15 rural counties in 2016. In his path to electoral college victory that year, Trump narrowly lost Nevada to Hillary Clinton by 2 percentage points, suffering defeats in blue Clark County and in the battleground of Washoe County. In 2020, Biden carried Nevada by just more than 33,000 votes via a similar path of winning Clark and Washoe counties.

On Tuesday, Laxalt is aiming to drive up numbers in those rural counties, attempting to flip Washoe red while keeping a check on margins in Clark County. On his side are economic forces unfavorable to Democrats in a midterm election where the party occupying the White House typically sees losses. Those dynamics are poised to boost Republicans across the board in Nevada, including in the governor’s race where Republican Joe Lombardo has led the Democratic incumbent, Steve Sisolak.

McDonald, who had a close relationship to Trump, molded the GOP into one of fealty to the president, even after Trump lost in 2020. That’s created fault lines in a party where a contingent has grown weary of replaying the last presidential election.

Laxalt, the former state attorney general who called the 2020 election “rigged” and filed lawsuits challenging the results, hasn’t garnered a national reputation for divisiveness as other polarizing figures in his party have, including Wisconsin’s Ron Johnson and Arizona’s Blake Masters. (Laxalt’s campaign told The New York Times that “of course he’ll accept the results” of the Nov. 8 election, even as other Republican candidates would not answer the question.) He is also a Republican who’s backed by both Senate GOP leader Mitch McConnell and McConnell’s chief antagonist: Trump.

But in events and appearances on conservative news shows, Laxalt has railed against the left, depicting himself as someone who sees no room for compromise.

“They want people like President Trump, they want people like Sen. Josh Hawley, they want people like Gov. Ron DeSantis. All these people are supporting me in this race because they know me,” Laxalt said on Steve Bannon’s War Room podcast in June. “They know I’m going to be that type of fighter that understands we have to defeat the left. This isn’t a group that we can compromise with or negotiate with. They must be put in the ash bin of history and, we’ve got to be able to go on offense and sell our ideas.”

During an April event with Texas Republican Sen. Ted Cruz, he referred to failed leaders in his own party.

“We all know that the last couple decades, not only has our country moved in the wrong direction, but unfortunately, our Republican Party and a lot of its leaders have failed to stand up for our values,” Laxalt said, according to audio of the event. “We failed to actually learn to fight against the left, to actually go on offense.”

Laxalt’s messaging is a far cry from Cortez Masto, who has highlighted her support for bipartisan legislation and has hosted events in battleground Washoe County, the home of Reno, alongside Republicans who were endorsing her.

Robert Cashell Jr., whose father was Reno’s longtime mayor and once served as lieutenant governor of Nevada, was among them. In an interview, he grew animated when asked about the state of his party.

“The Republican Party has lost its mind,” Cashell said. “Ronald Reagan probably wouldn’t get through a primary today in a Republican primary.” Still, he said: “The best way to change something is from the inside not the outside, that’s why I’m still a Republican.”

It’s people like Cashell who state Republicans have raged against in recent months.

“Here in Washoe County, we have made it abundantly clear that if you as a Republican damage the Republican brand, there are consequences,” Washoe County GOP Chair Bruce Parks said in an interview.

The county, as well as other Republican county organizations in Nevada have formally censured Republicans, like former GOP party chair Amy Tarkanian, after she endorsed two Democrats in Tuesday’s election.

“We no longer recognize them as Republicans,” Parks said in an interview, specifically naming Tarkanian. “They will never be supported by the Republican Party if they ever choose to run for public office.”

Tarkanian, who backs Laxalt’s candidacy, is part of a group called Republicans for Ford who were censured by the party apparatus after endorsing Democrats over two GOP candidates — including state Attorney General Aaron Ford, who is Black, for re-election. Tarkanian said she wouldn’t back the Republican nominee Sigal Chattah, after leaked text messages revealed Chattah had said Ford should be “hanging from an f—ing crane.”

Tarkanian, who said she voted twice for Donald Trump, responded to the rebuke saying it signifies the deterioration of the party since Trump’s ascent.

“Everyone thought, ‘We finally have someone who can teach us how to have a backbone, right? Then it just unraveled and now you’ve got a bunch of people who literally turned themselves into authoritarian-like, mini-dictators or bullies — adult bullies,” Tarkanian said in an interview. “If you don’t agree with them 100 percent on everything or you don’t agree with every single Republican that’s on the ticket, then you are shunned.”

(Chattah has told the Las-Vegas Review Journal the text was not racist and was purposely leaked to damage her politically.)

Tarkanian stood by her decision not to endorse Chattah.

“They can’t tell me how to think or who to vote for — who do they think they are?” Tarkanian said. “I’ll just wait for the pendulum to swing back to sanity.”