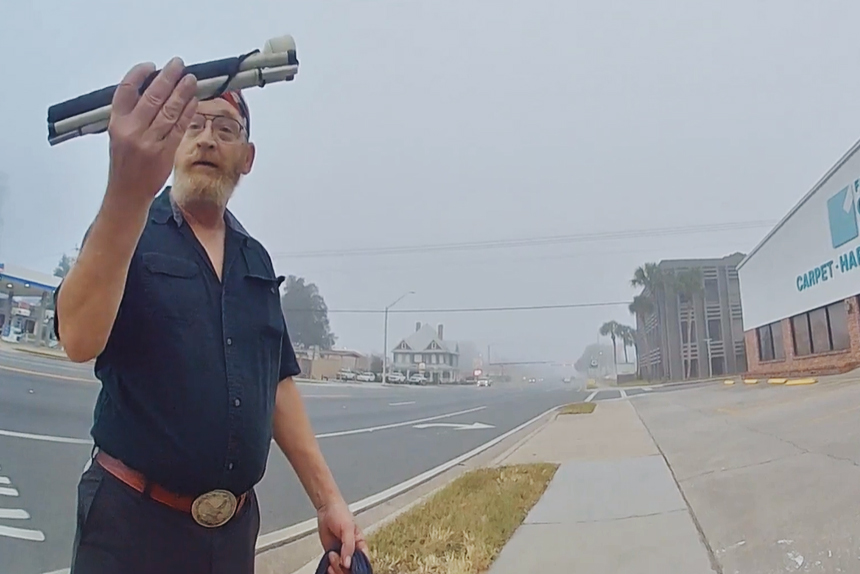 Two deputies will be suspended and a Florida sheriff has apologized after a visually-impaired man was arrested last month when his walking cane was mistaken for a gun, officials said.

James Hodges, 61, of Lake City, was arrested the morning of Oct. 31 for resisting an officer without violence, according to an arrest report and body camera video of his detainment provided Wednesday to NBC News by the the Columbia County Sheriff’s Office.

In a videotaped statement from Sheriff Mark Hunter posted to Facebook Tuesday, Hunter identifies the arresting deputies as Jayme Gohde and her supervisor, Sgt. Randy Harrison.

The deputies face suspension without pay and Harrison was demoted after an investigation was launched when Hodges requested body camera video of his arrest, Hunter said.

“As sheriff, I take full responsibility for this event and want to extend my sincere apologies to Mr. Hodges for the actions of my deputies,” Hunter said. “I do not feel these deputies’ actions were guided by ill intent, but rather by frustration and failure to rely on their training. Nevertheless, this conduct is unacceptable.”

A representative with the sheriff’s office clarified Wednesday Harrison won’t be eligible for raises or promotions for two years. The representative declined further comment and said the deputies were unavailable to speak.

The deputies will be required to take remedial training pertaining to civil rights, Hunter said.

Hodges was not immediately reached Wednesday. He told NBC affiliate WTLV of Jacksonville, “Makes my chest swell up, not in a proud way, but in a very appreciative way.”

The arrest report said Gohde stopped Hodges after seeing him enter a cross walk when a traffic control device indicated not to walk. The morning was foggy and overcast and drivers were using their headlights, the report said. The report said Hodges appeared to be carrying a “silver (chrome) pistol with a white grip in his back right pocket.”

NBC News does not know what preceded the video provided by the sheriff’s office or if it was edited. According to the four-minute body camera video, Gohde walks up to Hodges and asks what is in his pocket?

Hodges appears to say it’s a navigating aid. He tells Gohde, “What’s the problem? Are you a tyrant,” the video shows.

Gohde responds she is, actually, and asks Hodges for his name and date of birth, which he refuses to provide, according to the video.

Gohde then appears to say, “Do you want me to put you in handcuffs right now?”

Hodges asks what is her suspicion and she tells him, it looks like he’s carrying a gun in his back pocket. Hodges, according to the video, takes out the folded up cane, and shows it to Gohde.

They both insult each other, and Hodges asks if he’s detained?

Gohde again asks for his name and date of birth, and Hodges declines to give it to her and asks for her supervisor.

Harrison is on scene, the video shows, and Hodges walks up to him. Harrison explains that the cane could look like a weapon and he should identify himself when asked, the video shows.

Hodges responds, according to the video, he doesn’t need to identify himself unless there’s been a “reasonable articulated suspicion that I have committed a crime, am committing a crime or about to do a crime.”

Hodges is placed in handcuffs and Harrison, according to the video asks him, “Sir, are you legally blind?”

Audio in the video is turned off, but Hodges appears to mouth, “Yes, I am.” He then said, “I had to walk up here in the dark for jury duty which was cancelled.”

The video then shows Gohde ask Hodges if that was hard and he responds he wants her name and badge number.

And Harrison reacts to that comment, according to the video, “You know what, put him in jail for resisting.”

As Hodges is placed into a squad car, he yells, “I want your name and your badge number, too, sir.”

In the apology video, Hunter told the public his deputies will continue to work hard for their trust.

“I want to reassure you that as your sheriff, we do make mistakes,” he said. “But we take corrective action to fix them. This is how we get better.”