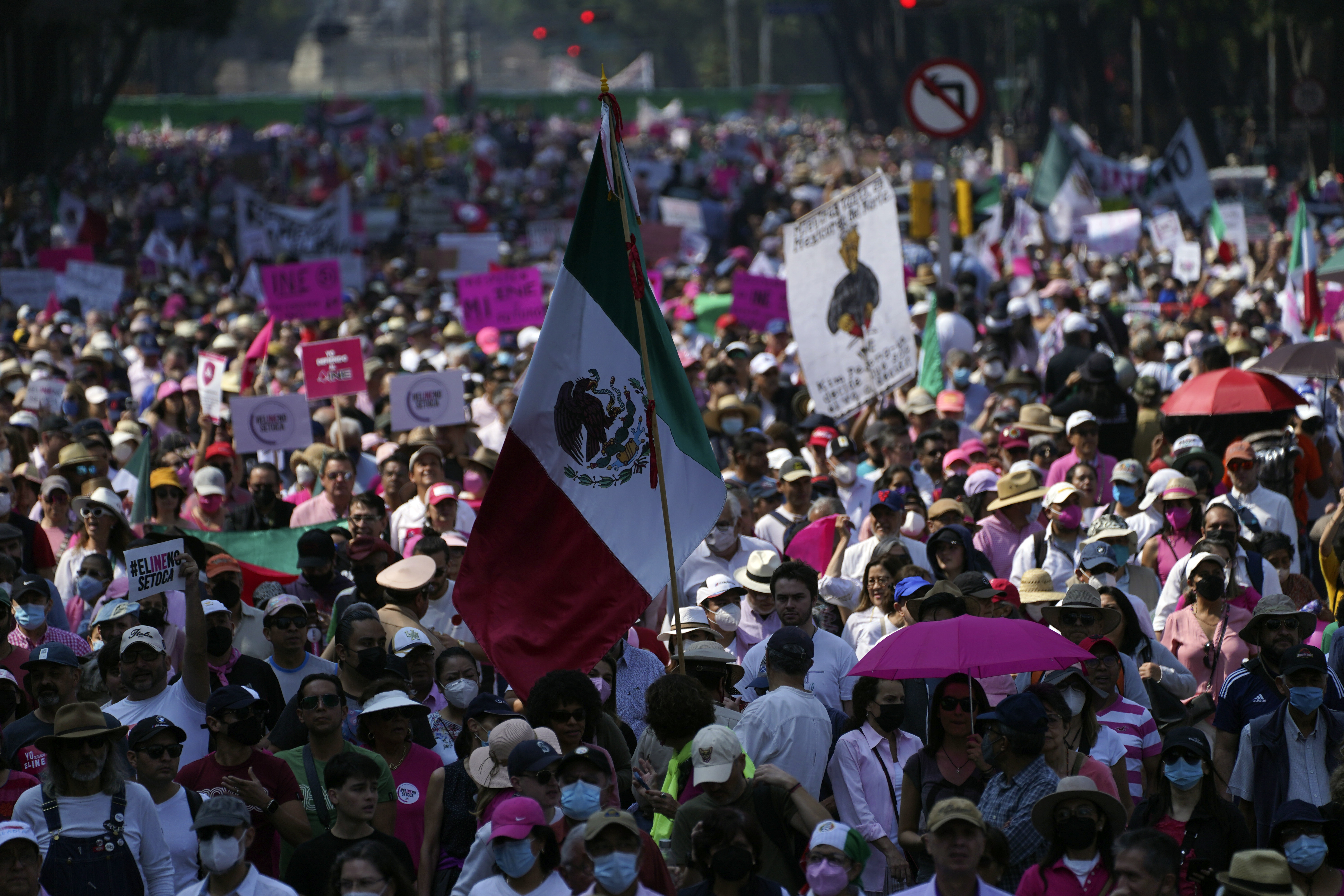 López Obrador sees the institute as beholden to the elite, but critics say his reforms would threaten its independence and make it more political. The initiative includes eliminating state-level electoral offices, cutting public financing of political parties and allowing the public to elect members of the electoral authority rather than the lower chamber of Congress.

It would also reduce the number of legislators in the lower chamber of Congress from 500 to 300 and senators from 128 to 96 by eliminating at-large lawmakers. Those are not directly elected by voters, but appear on party lists and get seats based on their party’s proportion of the vote.

The proposal is expected to be discussed in Mexico’s Congress in coming weeks, where the president’s Morena party and allies hold an advantage.

“I’m already fed up with Andrés Manuel, with so many lies, so much crime,” said Alejandra Galán, a 45-year-old manager, as she raised a Mexican flag in the middle of the multitude. “He wants to take the (electoral institute) from us so that eventually it’s like Venezuela, Cuba, but we’re not going to let him.”

Jorge González said such comparisons to authoritarian regimes may seem exaggerated at this point, but “I think it’s only a step away. We have to have a clear separation of powers, independent institutions and especially the National Electoral Institute.”

The 49-year-old, who works in the finance sector, noted the seven decades of uninterrupted rule by the Institutional Revolutionary Party, which was finally ousted in 2000. “The fear is not having an independent civic institution, where we can really trust in the elections and (instead) going back to a way with an institute where it’s run by a single party.”

Fernando Belaunzarán, one of the promoters of the protest, said 200,000 people participated in the march. Authorities did not confirm this figure.

López Obrador has spent decades battling electoral authorities. He considers himself a victim of electoral fraud on multiple occasions, though it was the National Electoral Institute that confirmed his landslide presidential victory in 2018.

Organizers have said the march is not against López Obrador, but to draw attention to the proposal and to urge lawmakers to vote against it.

López Obrador’s party does not have enough votes to pass the constitutional reform without support from the opposition.

Last week, López Obrador dedicated a good part of his daily morning press conferences to dismissing the promoters of the demonstration, calling them “cretins” and “corrupt,” aiming to trick the people. He defended the proposal as seeking to reduce the electoral authority’s budget and avoiding “electoral fraud.”

While agreeing that some cost savings could be desirable, some analysts worry eliminating the state electoral offices would concentrate power too much at the federal level and sacrifice efficiency.

Patricio Morelos of Monterrey Technological University pointed out that with López Obrador enjoying high popularity and his party controlling the majority of Mexico’s 32 state governments, they would have an advantage if the electoral authority is remade and would likely exert control.

Protester Giovanni Rodrigo, a 44-year-old salaried worker, said López Obrador does not want to let go of power, if it’s not himself in the presidency, he wants to decide who.

“I believe without a doubt he is the best politician that exists today in modern history and that’s why he is the owner of a party” that controls the majority of Mexican states, he said. “It hasn’t been enough. He wants more and more.”