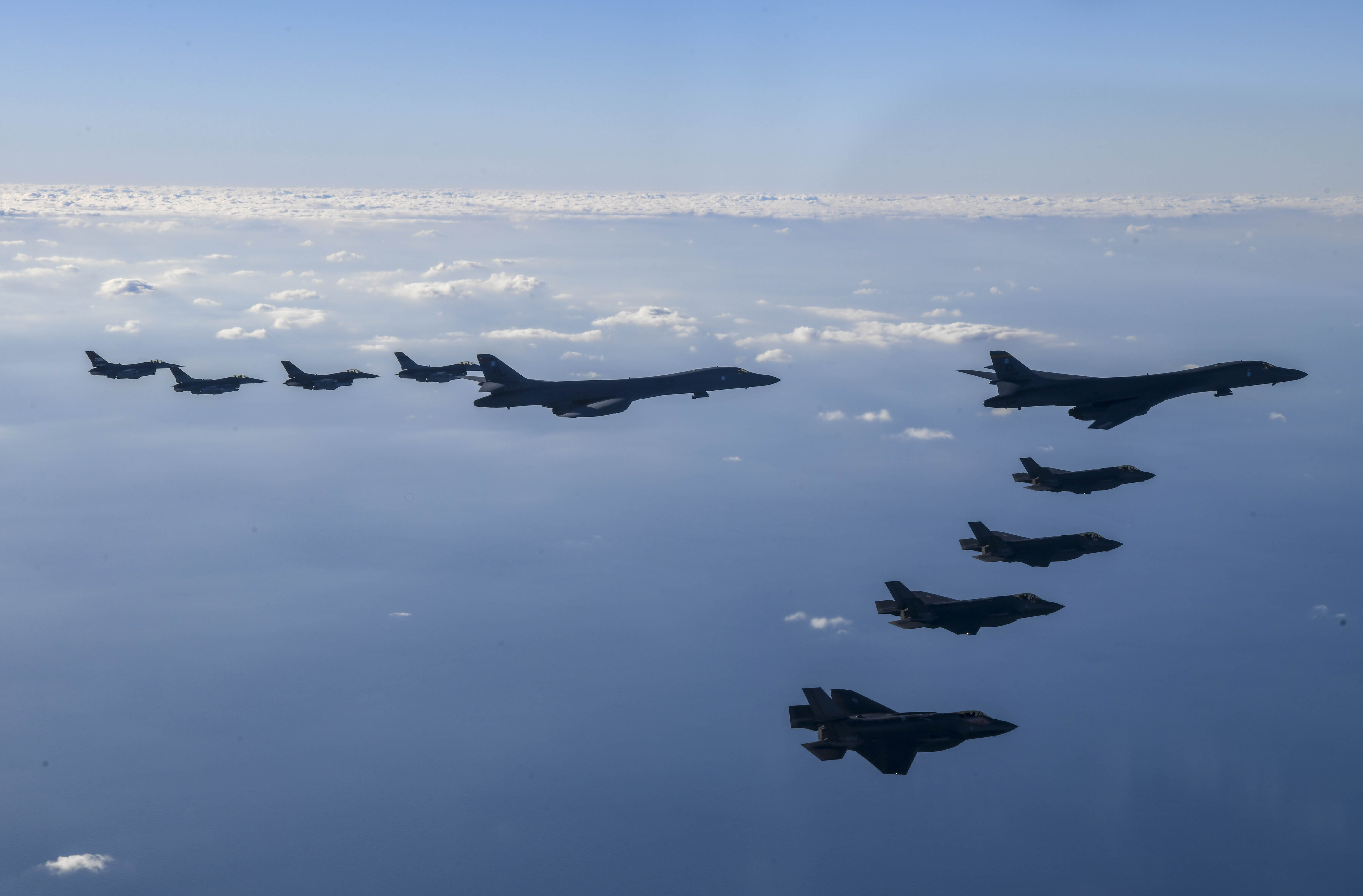 The South Korean military said two B-1B bombers trained with four U.S. F-16 fighter jets and four South Korean F-35s jets during the last day of the “Vigilant Storm” joint air force drills that wraps up Saturday. It marked the first time since December 2017 that the bombers were deployed to the Korean Peninsula. The exercise involved around 240 warplanes, including advanced F-35 fighter jets from both countries.

North Korea’s Foreign Ministry late Friday described the country’s military actions this week as an appropriate response to the exercise, which it called a display of U.S. “military confrontation hysteria.” It said North Korea will respond with the “toughest counteraction” to any attempts by “hostile forces” to infringe on its sovereignty or security interests.

South Korea’s Joint Chiefs of Staff said the participation of the B-1Bs in the joint drills demonstrated the allies’ readiness to “sternly respond” to North Korean provocations and the U.S. commitment to defend its ally with the full range of its military capabilities, including nuclear.

B-1B flyovers had been a familiar show of force during past periods of tensions with North Korea. The planes last appeared in the region in 2017, during another provocative run in North Korean weapons demonstrations. But the flyovers had been halted in recent years as the United States and South Korea stopped their large-scale exercises to support the former Trump administration’s diplomatic efforts with North Korea and because of the COVID-19 pandemic.

The allies resumed their large-scale training this year after North Korea dialed up its weapons testing to a record pace, exploiting a divide in the U.N. Security Council over Russia’s war on Ukraine as a window to accelerate arms development.

North Korea hates such displays of American military might at close range. The North has continued to describe the B-1B as a “nuclear strategic bomber” although the plane was switched to conventional weaponry in the mid-1990s.

Vigilant Storm had been initially scheduled to end Friday, but the allies decided to extend the training to Saturday in response to a series of North Korean ballistic launches on Thursday, including an ICBM that triggered evacuation alerts and halted trains in northern Japan.

Thursday’s launches came after the North fired more than 20 missiles on Wednesday, the most in a single day. Those launches came after North Korean senior military official Pak Jong Chon issued a veiled threat of a nuclear conflict with the United States and South Korea over their joint drills, which the North says are rehearsals for a potential invasion.

South Korea also on Friday scrambled about 80 military aircraft after tracking about 180 flights by North Korean warplanes inside North Korean territory. The South’s Joint Chiefs of Staff said the North Korean warplanes were detected in various areas inland and along the country’s eastern and western coasts, but did not come particularly close to the Koreas’ border. The South Korean military spotted about 180 flight trails from 1 p.m. to 5 p.m., but it wasn’t immediately clear how many North Korean planes were involved and whether some may have flown more than once.

In Friday’s statement attributed to an unidentified spokesperson, North Korea’s Foreign Ministry said the United States and South Korea had created a seriously “unstable atmosphere” in the region with their military exercises. It accused the United States of mobilizing its allies in a campaign using sanctions and military threats to pressure North Korea to unilaterally disarm.

“The sustained provocation is bound to be followed by sustained counteraction,” the statement said.

North Korea has launched dozens of ballistic missiles this year, including multiple ICBMs and an intermediate-range missile flown over Japan. South Korean officials say there are indications North Korea in coming weeks could detonate its first nuclear test device since 2017. Experts say North Korea is attempting to force the United States to accept it as a nuclear power and seeks to negotiate economic and security concessions from a position of strength.