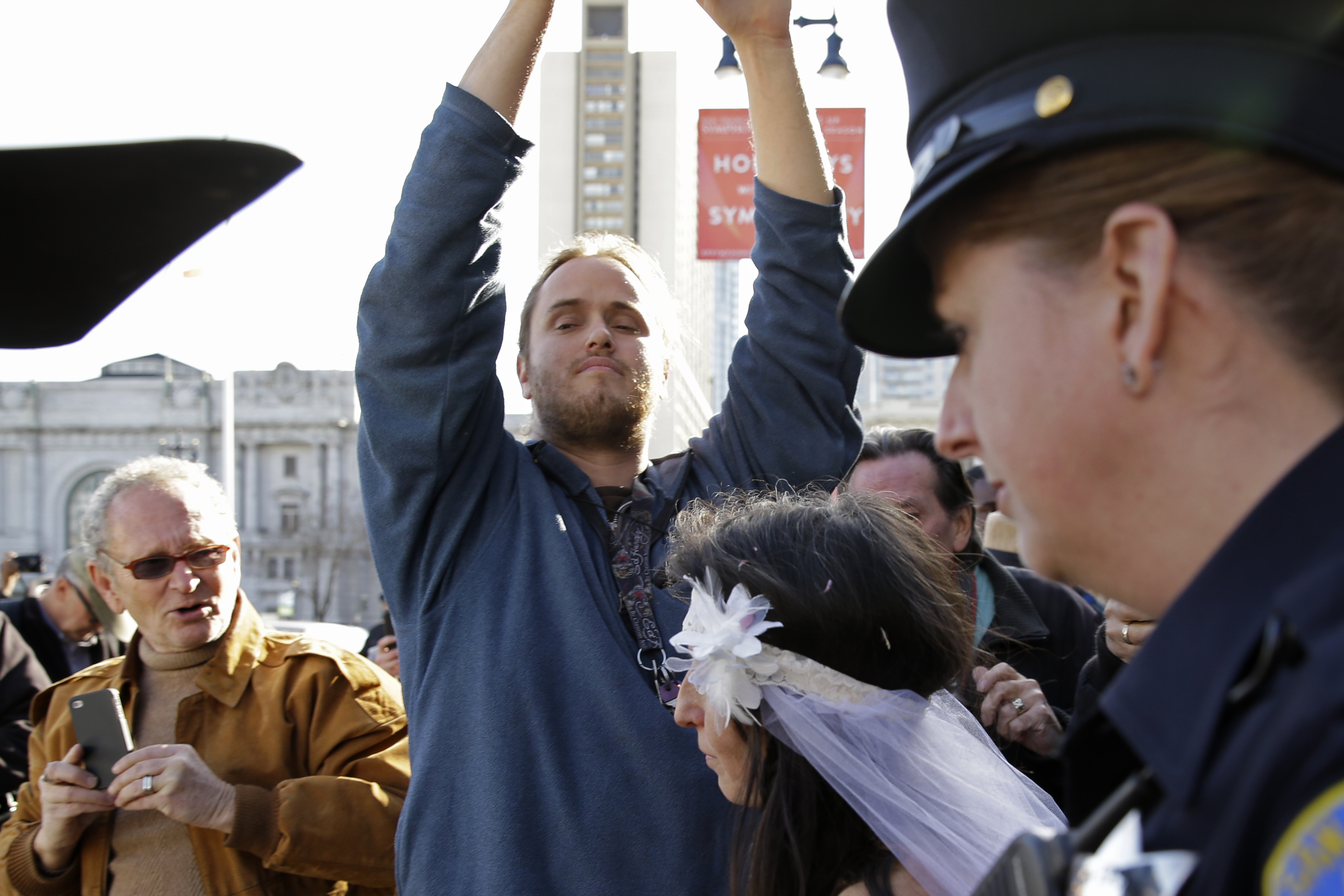 “This attack is terrifying, and the direct result of toxic right-wing rhetoric and incitement against Speaker Pelosi and so many other progressive leaders,” said state Sen. Scott Wiener, a San Francisco Democrat who had encountered DePape before the attack. “Words have consequences, and without question, the GOP’s hate and extremism has bred political violence.”

Police said DePape wrestled a hammer from Pelosi inside their home in the Pacific Heights neighborhood and struck him several times. The 82-year-old husband of the speaker was hospitalized but expected to recover.

Until now, the suspect was known to be part of a group of pro-nudist activists based across the Bay in Berkeley.

A photo published by the San Francisco Chronicle, and released after his arrest, shows DePape presiding, fully clothed, over the wedding of otherwise nude activists outside City Hall in 2013.

The paper said he was known as a “father figure” in a Berkeley group home that included a well known nudist activist known as Gypsy Taub. At the time of the wedding he was identified as a hemp jewelry maker. Wiener told the Chronicle that DePape was among a number of nude activists who protested around San Francisco in 2011 and 2012.

In more recent years, DePape has embraced the false claims that the November 2020 election was stolen, reposting on Facebook — in an account since removed from the platform — bogus claims by MyPillow CEO Mike Lindell and others associated with the campaign.

He reposted a video on YouTube denouncing the investigation into the Jan. 6 attack on the U.S. Capitol as a “farce,” according to CNN.

A blog featuring content authored by DePape offers a patchwork embrace of bigoted and fringe topics, including posts that feature anti-Semitic language, allege the existence of a “communist” agenda in schools and repeat many of the tropes of the online fever dream known as QAnon, which alleges without evidence that leading figures engage in pedophilia.

An archived page from another, now-defunct website also attributed to DePape suggests fury toward the government, the mainstream media and corporate powers, decrying “the elites/ruling class” and “the people who rule you” while warning “Tech giants and private industry” have become “so powerful they could single handedly silence the people.”

It was enough for many leading Democrats to conclude that toxic political rhetoric was behind the attack, even without authorities disclosing a motive. “While the motive is still unknown we know where this kind of violence is sanctioned and modeled,” Rep. Jackie Speier tweeted.