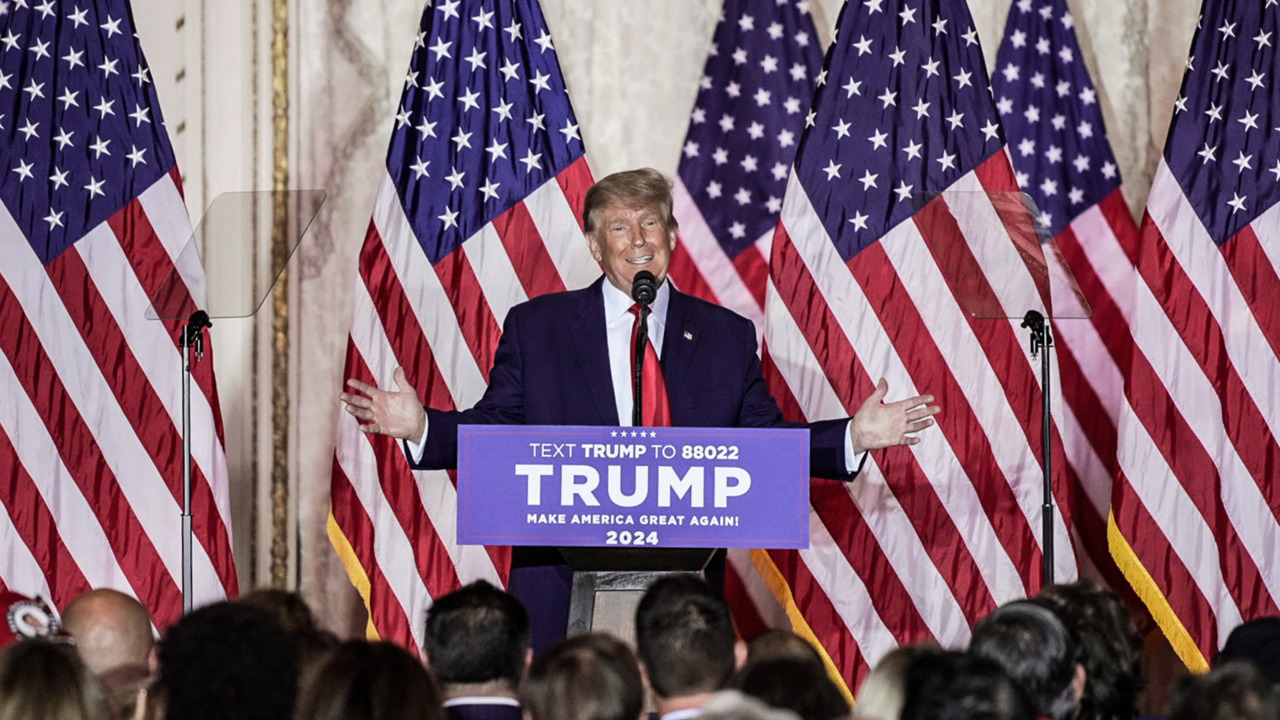 It is an extraordinary — although long anticipated — move for Trump, one certain to reshape his party’s trajectory, raise complicated legal questions and alter the presidency for the man who defeated him, Joe Biden. He explicitly discussed his campaign as an effort to restore the presidency he had.

“There has never been anything like it, this great movement of ours… And perhaps there will never be anything like it again,” Trump declared. “America’s comeback starts right now.”

Trump entered the ballroom at his private club alongside the former first lady. Before a room full of hundreds of supporters — including Trump world figures like Roger Stone, Kash Patel, Sebastian Gorka, My Pillow CEO Mike Lindell and the outgoing Rep. Madison Cawthorn, Trump portrayed his four years in office in rose colored hews. Over a mostly hushed crowd, Trump breezed past the pandemic that sent the global economy into a tailspin and instead argued that he prevented foreign conflicts and oversaw a bright, thriving economy.

“Under our leadership, we were a great and glorious nation,” Trump said. “But now, we are a nation in decline. We are a failing nation.”

He also pointed to stubbornly high gas prices under Biden, a porous southern border that Trump described as an “invasion” of migrants and illicit drugs and spoke in dark terms about blood-soaked streets that evoked his past speeches about “American carnage.”

“The decline of America is being forced upon us by Biden and the radical left lunatics who are running this country into the ground,” Trump said.

Trump aides ahead of the speech told reporters the goal was to offer a more focused version of remarks the former president has been delivering since leaving office. While Trump veered off script to knock Biden — riffing on the current White House occupant ditching a planned dinner with world leaders abroad — he mostly focused on contrasting his time in office with the last two years.

But Trump also couldn’t avoid blasting the federal government and “deep state” for its search of Mar-a-Lago, repeatedly calling himself a “victim” and then delving into voting changes that would allow only the use of paper ballots.

For months, Trump and his team have been planning his announcement and sketching out a campaign operation. There will be no formal campaign manager for the upcoming run. Instead, two longtime Republican operatives, Chris LaCivita and Susie Wiles, will oversee operations. LaCivita will be leaving his firm, FP1 Strategies, to take on the new role.

Brian Jack, who served as White House political director for then-President Trump and currently runs Kevin McCarthy’s national political operation, is expected to also play a key role in the campaign and will focus on the nuts and bolts of presidential primary politics for Trump. In addition, Justin Caporale, a former top aide to first lady Melania Trump who also served on the Trump 2020 campaign, will have a senior managerial role. Two former Trump White House officials — Clayton Henson and Alex Latcham — will be in senior political roles on the campaign.

Taylor Budowich, Trump’s current spokesman, will not be part of the campaign but instead will oversee principal pro-Trump super PAC, MAGA Inc. Tony Fabrizio, Trump’s longtime pollster, will do polling for the super PAC.

In the past two elections, Trump’s campaign headquarters were located in New York and Virginia in order to be close to where he lived. This time, Trump and his team of advisers will work from his Mar-a-Lago resort in Florida until any decisions are made about the location of an official campaign outpost.

At rallies and political events during the midterms, Trump’s message has mainly focused on the economy, the border, crime and the Biden administration. But he continued to fixate on his own legal issues and his 2020 election loss, insisting without evidence that there was widespread voter fraud.

Republicans say those fixations are a liability with voters. And there are renewed fears about a Trump candidacy following the party’s poor showing in the 2022 midterm elections, when a number of candidates backed by the former president failed to win key state and federal offices.

Aides and advisors had tried to discourage Trump from announcing a presidential bid in hopes that he would do so after the Georgia Senate runoff elections in December. But he was unpersuaded by those pleas and used his announcement on Tuesday to tout his endorsement record, noting that Republicans were on track to gain control of the House of Representatives and to encourage his supporters to back Republican Herschel Walker in that runoff.

Historically, Trump is in rare company with his announcement of another run. Only one other president, Democrat Grover Cleveland, left the White House and ran for a second term four years later.